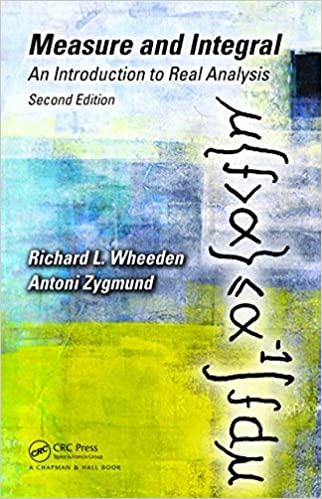 Measure and Integral: An Introduction to Real Analysis (2nd Edition)

Download Measure and Integral: An Introduction to Real Analysis (2nd Edition) written by Richard L. Wheeden, Antoni Zygmund in PDF format. This book is under the category Mathematics and bearing the isbn/isbn13 number 1498702899/9781498702898. You may reffer the table below for additional details of the book.

Now considered a classic version on the topic; Measure and Integral: An Introduction to Real Analysis; 2nd Edition; (PDF) offers an introduction to real analysis by first forming the theory of measure and integration in the simple setting of Euclidean space; and then offering a more general treatment based on abstract notions categorized by axioms and with less geometric content.

Contains many new exercises not present in the first edition

This highly respected and extensively used textbook Measure and Integral: An Introduction to Real Analysis 2e for upper-division undergraduate and first-year graduate students of mathematics; probability; statistics; or engineering is updated for a new generation of college students and instructors. The ebook also serves as a handy reference for professional mathematicians.

NOTE: The product only includes the ebook; Measure and Integral: An Introduction to Real Analysis; 2nd Edition in PDF. No access codes are included.

Preliminaries
Points and Sets in Rn
Rn as a Metric Space
Open and Closed Sets in Rn, and Special Sets
Compact Sets and the Heine–Borel Theorem
Functions
Continuous Functions and Transformations
The Riemann Integral
Exercises

Be the first to review “Measure and Integral: An Introduction to Real Analysis (2nd Edition)” Cancel reply