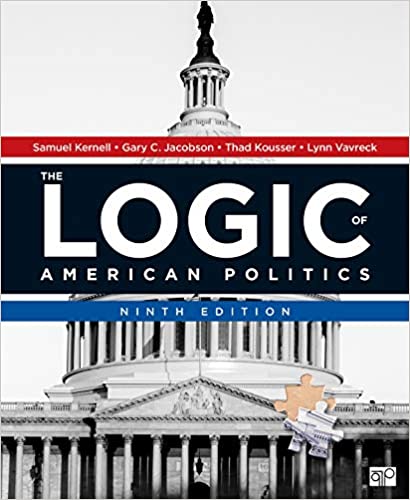 This popular textbook arms you with a toolkit of institutional design concepts—command; agenda control; voting rules; veto; and delegation—that help you identify how the American political system was designed and why it works the way it does. The authors construct your critical thinking through a simple yet powerful idea: politics is about solving collective action problems.

Comprehensively updated to account for the most recent events and data; The Logic of American Politics; 9th Edition; (PDF/ePub/AZW3) discovers the increase in political polarization; the growing emotional involvement people have to politics; the partisan politics of judicial selection; Americans’ reactions to changing demographics and the changing nature of presidential leadership. Reviewed to include the 2018 election results and analysis; this latest 9th edition offers you the tools you need to make sense of today’s government.

NOTE: The product only includes the ebook; The Logic of American Politics; 9th Edition in the original ePUb & AZW3. A converted PDF is also included. No access codes are included.